One of the largest celtic fields…

The extensive Celtic field area on the west side of the municipality of Vaassen is situated on the outskirts of a large sandy outcrop of a push morene shaping the Veluwe. In an elevated landscape and bordered by small water streams, this area provided the necessary conditions for agriculture and habitation. Today the area consists of patches of forest, heathland and agricultural fields.

A prehistoric road on the north western side of the area is thought to be older than the fields bordering it: the fields more or less follow the direction of the road. It could form the connection between groups of Neolithic grave mounds situated in the vicinity. The area may have seen some scattered settlements in the centuries to follow the period the Celtic fields were in use. However a map of 1685 shows the area mostly empty with patches of forests and sandy waste lands and a few small habitation locations like Vaassen, Gortel and Nierssen. vaassen is first mentioned in a cloister codex at the end of the 9th c. AD. 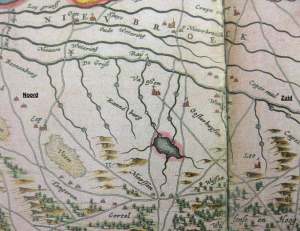 The earliest signs of human presence in the area are found in the form of Neolithic grave mounds.

In 1967 en ’68 the first measurements and excavations on the Celtic field complex were carried out to gain more knowledge about the function and the development of walls and fields. Soil traces and some pottery shards have been the only finds. Brongers has reconstructed the complex in a drawing. One of the grave mounds in Nierssen, which was first excavated in 1907 by J.H. Holwerda, has been re-examined by archeologists from Leiden University in 2009 and was dated to the Neolithicum.