Agricultural heritage next to industrial heritage…

The National Park De Meinweg, in which this Celtic field is situated, is located in a terrace landscape which has been formed by erosion of riverine sediments of the Rhine and Meuse rivers. In between brooks and brookvalleys that cut through the landscape, higher located terrain was suitable for agricultural developments. The area nowadays consists of a mixture of forest patches, small lakes and heathland. 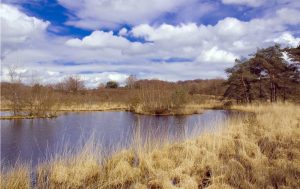 A mixture of agriculture, forest grazing and forest exploitation has been in place since 2000 B.C. Sheep and cattle would roam the forest and sod cutting took place in open areas. This intensive use of the forest led to its almost complete disappearance at the end of the Middle Ages when heathland took over. Further soil degradation meant drift sand areas could form. At the end of the 19th c. and early 20th c. recultivation of the land for mining purposes, construction of a railway and reforestation of waste lands gave the Meinweg area a new ‘look’. However, nature preservation organisations recognised the cultural and natural heritage of the area and a large part is acquired by Staatbosbeheer. In 1990 the area is deemed a National Park and is nowadays protected under European guidelines for its geological, biological and landscape values.

To the south-west of het Meinweg several find locations of pottery shards and flint are known from the Mesolithicum, Neolithicum, Bronze and Iron Age.

After analysis of AHM data in 2008 the location at the Meinweg was reported as a possible Celtic field location. Subsequent coring did not reveal anthropogenic layers. Additional coring and test trenches are carried out in 2012 to further investigate the nature of patterns visible on the AHN maps. The results differed from other Celtic fields in the sense that no pottery or charcoal was recovered and the lack of anthropogenic material used for the construction of the walls as can be seen in other places. Although the genesis of the walls thus remains unclear the limited height could suggest that the fields and walls have been in use over a relatively short time span.