Landscape context
The extensive Celtic field at Balloërveld is situated on the northern extension of a large boalder clay ridge near the village of Rolde. Its position matches the part of the field where the soil has been exposed to relatively little erosion.  In terms of soil composition, both dry and wet podsols dominate the landscape. From a pedological landscape perspective, these soils provide an excellent location for the presence of prehistoric agricultural fields because of their excellent drainage and fertile properties. 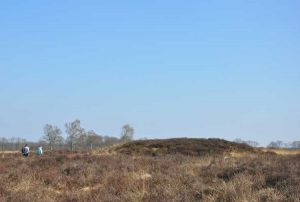 The Galgenberg, a large burial mound on the Balloërveld. Source: Drents Archief

Three large burial mounds (see ‘Archaeological context’) are named after later historical use of these visible (cultural) landscape features. Their names, Mandenberg, Stakenberg and Galgenberg all refer to their use as a site of a gallows (a ‘gallows hill’). These sites were purposefully located far from the village centres, for their grim judicial nature fit the wilderness more than the inhabited world.
Another witness of the past are the remains of a wide network of wagon trails stretching to the North, that date at least to the Late Middle Ages. The bundles of multiple overlapping trails are the result of their long-term use; whenever a trail was deemed impassable, its trajectory was moved slightly. Another reason for the presence of multiple tracks stems from the use of a variety of axis-widths up until 1671, which required a variety of trails.

Large scale peat reclamations from the early 20th century onwards have lead to the growth of an extensive heath land, causing the site to be a preserved area of nature.
Finally, the Balloërveld contains the remains of an anti-tank ditch as well as multiple trenches from the Second World War.

Archaeological context
In terms of archaeological value, the Balloërveld is of importance through the presence of a Celtic field, ca. 38 burial mounds that were excavated (and partially restored) by Van Giffen in 1933 dating to the Neolithic, Bronze age and Iron age and an urn field.  [UNFINISHED]

Archaeological research
The Celtic field system at the Balloërveld has not been the subject of systematic research up until now. Its high visibility on LIDAR-images, however, means that the site is a very important region with the potential of extensive future research.