The Noordse veld consists of a heathland area lying on one of the higher parts of the Hondsrug, between the brook valleys of the Oostervoortsche Diep and the Grote Madsloot. Its location is situated between a bolder clay plateau that was deposited during the Saale ice age, wherein a number of depressions have developed. On top of the bolder clay lies a coversand deposit within which loamy podsolic soils have been formed.

Cultural-historical context
After partial heath land reclamation, forestry planting was started in the area around 1940-1941. A large part of the Noordse veld was dug away in 1943-1944 to make place for a German dummy aerodrome. The aerodrome, supplied with wooden aircraft, was meant to distract attention from the nearest military airport (a few kilometres to the West of the field).

Archaeological research
The first research done on the Noordse veld was conducted by the curator from the National Museum for Antiquities (RMO) Caspar Christiaan Reuvens. He measured some of the arable plots (at that time considered to be just ‘little fields’) and drew some sketches of them. His successor, L.H.F. Janssen, continued the research by digging a trench through both a field wall as well as the field itself. In his opinion, the pottery discovered during this excavation could be compared with sherds already discovered earlier in the research of burial mounds. 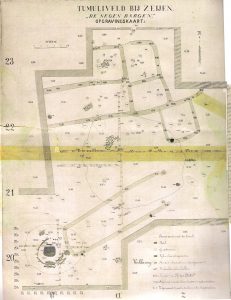 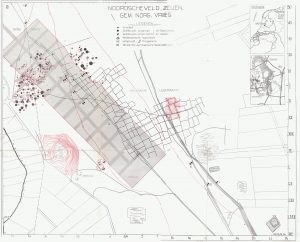 The next investigation following these ‘pioneering excavations’ was done by Albers Egges van Giffen in multiple phases during the period between 1917-1968. Originally the focus of the research was on a number of grave mounds lying at the northern edge of the Celtic field. Important material discoveries made during this research were, among others, a bronze sword and pottery fragments that facilitated the dating of the mounds. During an excavation in 1937, however, the Celtic field itself became the focus of research; the aim was to uncover at least one complete arable plot. Here Van Giffen established for the first time the existence of older cultural remains beneath the Celtic field walls.
The investigation into Celtic fields continued during the years of war and finally ended in 1968 with the reconstruction of a number of walls that had been removed for the purpose of constructing a German airport.

It was only in 1993 that the research into the fields was resumed by Theo Spek, who investigated a plot in the southern area of the field system together with an interdisciplinary team. In 2003 the National Heritage Agency (RCE) subsequently dug two test trenches with the aim to determine a series of characteristics that would elucidate the degree of field erosion. Apart from a number of features no important finds were unearthed during this project.

The most recent light shed on the Noordse veld consists of a series of research campaigns conducted by dr. Stijn Arnoldussen (Groningen Institute of Archaeology).   [FINISH]