The Kleuvenveld was situated on a plateau which was bordered on three sides by brooks. The soil consist of coversand with boulderclay underneath at a depth of over 1.20 m. Traces of heathland soil was found underneath the recent agricultural topsoil layer. Nowadays the Kleuvenveld has been transformed into a urban area called Marsdijk.

Peelo saw its first habitation in the Iron Age and agricultural settlements formed a small hamlet. Looking for fertile soils the settlement location changed several times throughout Roman and Early Medieval times. The relocation of the cloister of Mariënkamp nearby Peelo may have been of influence in the agricultural development as well as other historic events. The cultivation of heathland at the end of the 19th c. meant Peelo could expand to being a small village before it was incorporated in the city of Assen in the second half of the 20th c.

In 1983 en 1984 excavations were carried out in the Celtic fields that were spotted on aerial photographs from before 1940 and the late 1970’s. In between two large test trenches several Iron Age grave mounds were located of which two have been excavated by Van Giffen in 1939. Three house plans and numerous smaller buildings and pits, possibly used for water or grain storage, were discovered. Besides a number of pottery shards two grinding stones were recovered from one of the pits. In total five settlements areas have been reconstructed within the Celtic fields area. 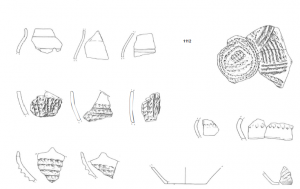 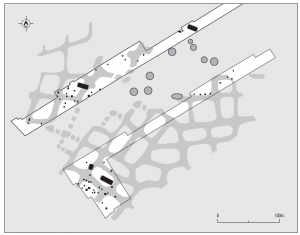