The Hoornboegse Heide is situated on the flanks of a push-moraine landscape, south of the city of Hilversum. Peat has been able to extend itself towards the edges of the push-moraine and has remained present in the southwestern part until far into the Middle Ages. The soil in the heathland exists of a layer of boulderclay and coversands. A podzol-soil has formed in the top of this layer which, on the flanks of the push-moraine, is characterized as being a poor loam or a weak loamy sandy soil.

Altitude map of the Hoornboegse Heide with in the centre the Celtic field structure.

From the late 17th century, the area around Hilversum consisted of uncultivated land and relatively empty heathland used for the grazing of sheep and cows. Besides grazing land the area would function as a source for sand, sods and peat. The cultivated parts have been used as agricultural fields. At the end of the 18th century the estate Hoorneboeg is established at the highest point in the area. From more recent times is the construction of the anti-tank ditch in the Second World War around Hilversum.

Remarkable is a private find of a part of a stone knife of which the provenance should be sought in Northern France. Unfortunately the context of the artefact remains unclear: is it a possible gift from a grave or has it been discarded or lost. A second special find is a flanged axe (randbijl), probably originating from Switzerland or Southern Germany. Its size of almost 30 cm renders the axe unpractical for daily usage, giving rise to the assumption that the object was used in a purposeful deposition. Fourteen gravemounds are situated in the eastern part of the heath of which several have been restored in the eighties. It is assumed that the mounds date from the Middle Bronze Age as well as the Late Bronze and Early Iron Age. Late Medieval cart tracks have possibly been part of the route between Utrecht and Amsterdam for the transport of man and cattle. 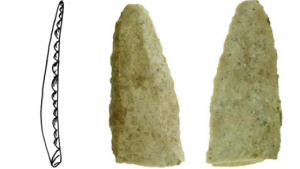 Fragment of a flintstone knife (Theunissen and De Kort 2014, fig. 8)

The several finds and grave mounds indicate that the area has been visited with a recurring regularity, probably from the Late Neolithicum onwards, for shorter or longer periods. Recent archaeological coring research in wall remains has uncovered some pottery fragments and dozens of charcoal particles.  The charcoal can be determined to the level of genus like oak, willow and pine. An explanation for the occurence of charcoal in the walls around a field may be the use of household waste for the construction or raising of the walls themselves. Other possible indicators for habitation in the area like postholes, have not been discovered in the cores. Therefore the use of trenches is required for a more extensive research into habitation remains. The use of the area for grazing and sods for centuries has flattened the celtic field structures which today are no longer visible with the naked eye.